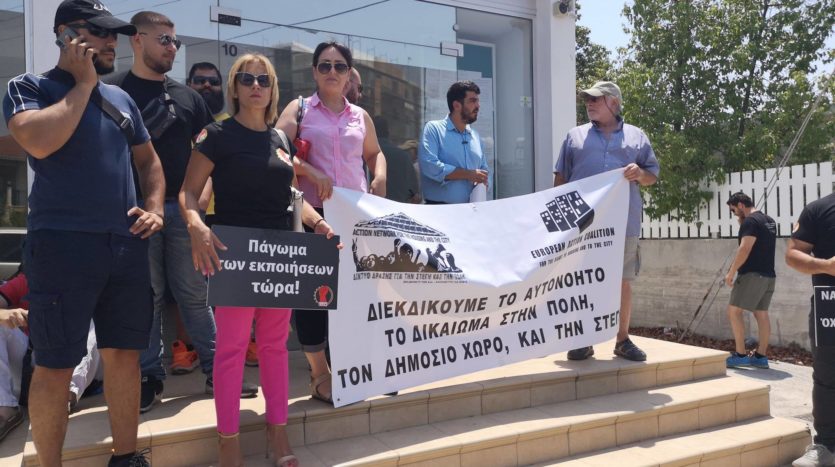 Already from his first tenure in presidency, the neo-liberal President Anastasiadis, sent us a very clear message by the very acute way we felt the shrinking of democracy, the severe cut of our standard of living, the increased unemployment , the flexible working conditions with the utmost minimum wages, or the mere “work hard and get a pittance” and finally by depriving working people of their housing and other small businesses or agricultural properties.

Τhe crisis was used by the regime as a vehicle to transfer the social wealth from the producers, that is the working people, to the elite. This was achieved through surplus derived from unpaid and very low paid work. The looting process is still on.

Ever since the looting started and the Parliament covered it with the pro bank law that gave banks immense rights (it was voted in 2014), working people were deprived of their housing and other properties as the banksters blackmailed with taking property to pay off the unsustainable loan. In some cases what people gave in return to the loan payoff was enough; But in much more cases people lost almost everything and still owed to the banks. Only the time will come soon for them to be evicted from their homes.

This is how the Parliamentary majority, then, facilitated the banks by giving them the right for express-quick foreclosure-auction and eviction rights, while they actually subtracted the rights from the working people of having housing and a decent life, along with both their human and constitutional rights. As if all these were not enough, last July the majority in the Parliament voted a supplementary law that made things even worse for people with unsustainable loans. In essence now people had no chance of asking for protection of any kind from the bank arbitrariness, which of course was well into the frame of usury. Even if someone’s case was in court the bank could sell the house and if at a later point the court concluded that what the bank did was from irresponsible to criminal, all would happen would be for the bank to compensate the person who would have already lost his/her house or/and any other property.

In this kind of situation, the auctions sky rocketed and there was a lot of unrest. The pressure amongst the people was building up steadily. So, the Parliament very recently voted for some relief law which actually allowed debtors to go to the courts and question the legitimacy of the banks ’actions against them.

In essence the Foreclosure Law, as it is now, is definitely unconstitutional and it is an insult to our society and our democracy. The two laws voted recently by the Parliament do not change the concept of the foreclosures law. What it does is that it restricts the arbitrariness of the banks and it constrains the banks to follow the directions of the Central Bank and finally to proceed to logical restructures of unsustainable loans.

The “Presidential Referral” of these two laws show beyond any doubt that this regime crashes down on peoples’ human and constitutional rights, it is against public interest and it’s “solidarity” to the banks and other looting institutions is more than obvious.

This is why we called for a mobilization and action outside the parliament on 29th July. We should practice pressure on parliament members so as to make them vote for the people and not to support the president foe a second time who fights for the “rights” of the banks and not the rights of the people. We do not know the outcome yet, but we will stay mobilized as long as it takes until we get the result we want.

Habita! The housing struggles in Lisbon
15 Demands in the Face of the COVID-19 Pandemic