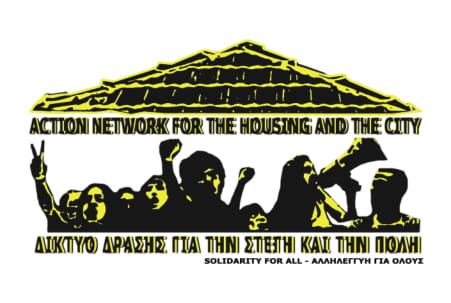 A new grassroots network in Cyprus emerged in 2019, under the name: Action Network for The Housing and The City-Solidarity for All. Some of the founders are ex-members of the Cypriot movement against foreclosures and the rest are people who want to contribute to the common European struggle on a wider, more inclusive spectrum. We are not one dimensional in our struggle. We do not only fight against foreclosures and the consequent evictions. For us the struggle does not lie in one track. It is more than that. We are in the front line struggling against high rents and their resulting evictions as well, as we are against gentrification, touristification, and a lot more.

We are ordinary working people who experience, as all do, the pauperization procedure
imposed on us by the bourgeois through the crisis with which they have burdened us. Our organizational frame is that of a horizontal and non-hierarchical structure. We generally seek for consensus but when this is not possible, we vote. We work through local assemblies and a Pancyprian assembly as needed.

We address to our fellow citizens who consist the mass of the working people, who involuntarily suffered the tremendous consequences of the class war imposed on us through the crisis, by becoming unemployed or suffering a dramatic reduction of their income and the related benefits or losing their housing or are about to lose it, to the small family businessmen who lost their clientage and are now losing their working premises or the farmers who lost or are losing their farms. We address to all the violently pauperized people in Cyprus regardless of their origin, religion, sex or status. This is a call for common struggle.