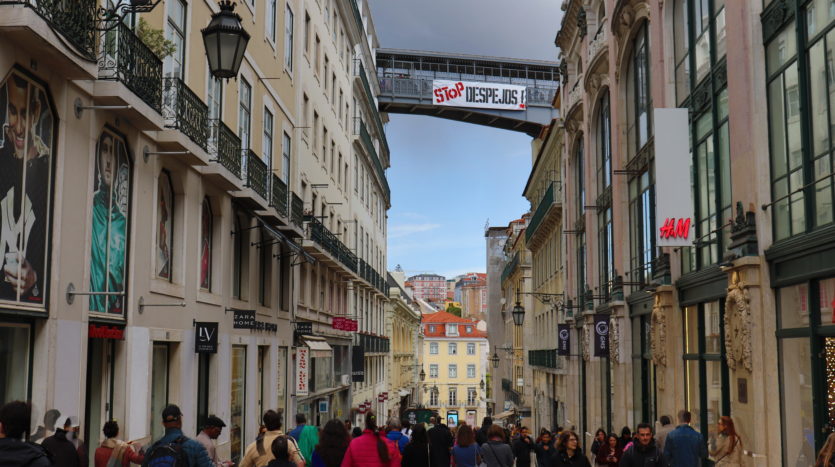 Habita! The housing struggles in Lisbon

The struggling year 2018/2019 opened for us at Habita with the exciting experience of hosting the coalition meeting. A challenging moment for our small community but that has allowed us to grow enormously from an organizational, political and human point of view: knowing directly the struggles and the comrades who carry them forward has supplied us with energy and allowed us to make a qualitative leap in terms of ambitions and daily practices of struggle.

On September 22, 2018, during the meeting, was held an important demonstration for the right to live, the first in this sense in the country since 2006. About three thousand people paraded in the most diverse ways. The aim was to put the housing crisis that crushes the country at the centre of the public debate and to put together the frayed fabric of the city’s social movements to defend the city from property speculation. A goal that has been partially achieved: since then media and parties have given a different emphasis to the issue of housing, the different struggles have resumed dialogue, getting to know each other, regroup. The ability to bring to the streets the necessary mass movement that serves to face a housing crisis (and social) of such magnitude has been lacking. But we had no illusions and we can say that, together, we have traced the path to follow.

Autumn saw us strengthen our action in our more traditional fronts of struggle: we fought alongside the inhabitants of the informal district 6 de Maio, in Amadora. For years, the City Council has been pursuing a policy of total demolition of these neighborhoods, very often without any care at all to provide alternative housing for residents. To ensure that all the inhabitants of the neighborhood were assigned a house, we have repeatedly occupied the premises of the State Secretariat for Housing, opening negotiations on several fronts. This has meant that many families that had been excluded have now entered the process of allocation. But the
struggle continues, and it will last until everyone gets a home.

Another important area of struggle is that of the families occupying the houses of the social housing neighbourhoods of Lisbon. Like private individuals who have left their buildings in the city centre to rot for years, the municipality is unable to manage its assets except to sell them to the highest bidder. In the social housing neighbourhoods we are therefore faced with the paradox in which families live in overpopulation, having thousands of public houses uninhabited for years as neighbours. They are mainly women with children who, tired of waiting for the attribution of a house to which they would be entitled, decide to take the houses and save
them from abandonment.

We are still in a very difficult process of organizing the struggle, but the actions we have taken during this last year (repeated collective speeches during municipal meetings, multiple occupations of the Department of Housing Policy, a campaign of constant communication) have allowed the vast majority of these families have not been evicted and left on the street (as was the initial intention of the municipality in the face of the problem).

We continue to face difficulties in attracting and finding effective strategies for rent problems in the private sector. For this reason we have undertaken training trips in groups belonging to the coalition and not, in order to learn the organizational practices of these sectors in other countries. These trips have enabled us to strengthen our fundamental international ties and to lay the foundations for improving our daily work. In a historical-geographical context that is not inclined to activism, Habita believes that it is essential to dynamize existing disputes and create bonds of struggle based on mutual knowledge and common practice. For this reason, in recent times we have never failed to dynamize new important realities such as Stop Despejos (Stop Evictions), the creation of new district committees, participation in the trans-feminist movement and so on.

Lisbon is under attack in many ways: it is becoming more expensive every day and it is becoming difficult for its inhabitants to access many services, but also to an alternative culture that escapes the logic of the market and privatization: we are proud to animate and be part of the Sirigaita, local in the center of Lisbon that is our headquarters, our home, and that in a short time has become a cultural reference point for many.

In short, the city is changing in dizzying rhymes, but Habita as well. We are growing and we are fierce, convinced that we can build a popular power necessary to save the planet from the destruction of wild capitalism starting with the fight for housing.

Airbnb and Co. drive us out of our neighborhood and cities. Tourists in hotel, families in houses!
Cyprus now