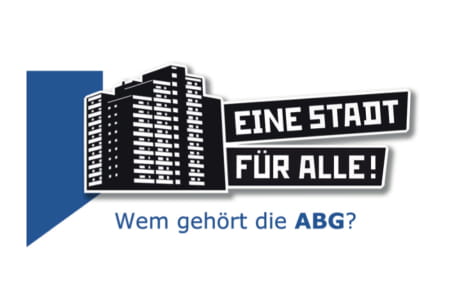 In Frankfurt and the entire Rhine-Main area, we are experiencing a severe housing shortage. Rents are rising, luxury apartments are being built, offices stand vacant and people are being displaced. For people with low income in Frankfurt the “right to housing” has been de facto abolished. Even with an average income, it has become more and more difficult to find affordable housing in a central location. At the same time people with or without permits have to live on the streets of the self proclaimed “financial metropolis”, as people are evicted from their homes and self-organized housing projects are prevented from being realized. City politics fuel these developments instead of guaranteeing social equality: ABG-Holding, the city owned housing association, owns one fifth of all rented apartments in Frankfurt. However, the association operates like a profit-oriented property investor and exercises oppressive business policies – all with political backing. In this sense, city politics and the ABG bear responsibility for the housing situation in Frankfurt and the region.

We, the campaign “A city for all! Who does the ABG belong to?” want: Affordable living space for all: We therefore demand an immediate rent freeze! Spaces for social and cultural initiatives: We therefore demand the immediate support for Project.Shelter, for the “Offene Haus der Kulturen im Studierendenhaus” in its present form and the realization of the housing project for Romani people on the Bockenheim campus! The houses to the people who populate them: To begin with, at least half of the existing housing must be put under public authority and should eventually be controlled by the tenants! Our campaign, supported by initiatives focusing on city and city district quarter matters, tenant organizations etc., is open to participation of everyone and committed to a long-term strategy. We are here to stay: in our apartments, in our districts, in our city, in our region – let’s fight for this together!