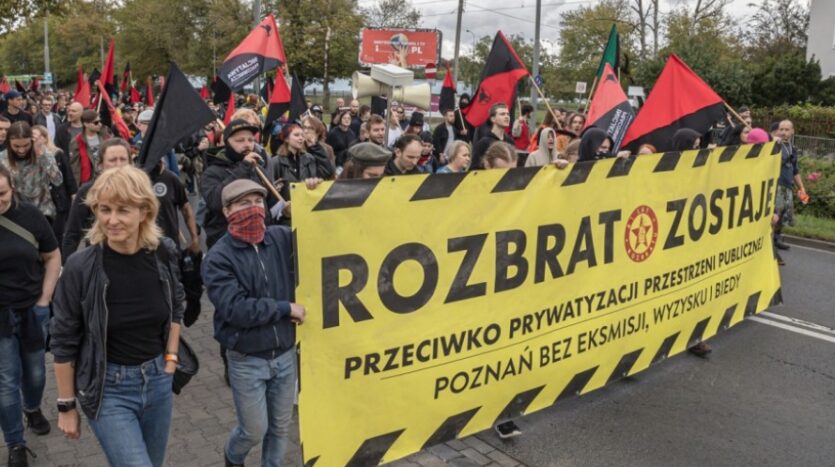 ROZBRAT with its 30 years of living resistance and ‘creating-the-other’ is one of the oldest squats in Europe. Its importance pertains not only for the movements in Poznan and in Poland. ROZBRAT is an acceleration factor for leastwise the housing and the antifascist movements in Europe. A vivid and bubbling shelter for solidarity, mutual aid and selforganizing always flavored with strictly Do-It-Yourself attitude.

Beside its myriads of functions as a social, cultural and political space (see links below or hyperlinks) ROZBRAT is the breeding place of Wielkopolskie Stowarzyszenie Lokatorów (The Wielkopolska Association of Tenants) which is a member group of the European Action Coalition for the Right to Housing and the City (EAC). Our comrades and friends sparkle with their variety of political struggles and always emphasize intersectionality. ROZBRAT is the ultimate example why movements need squats as interfaces between political organizing and collective living, between non-commercial cultural events, practical creation in their workshops as well as radical theory, or in short between doing and thinking.

The squat of our comrades is under pressing threat of eviction again. Next Thursday, the 15th of September a court hearing will take place and a final judgement is to be issued. We know that spaces as ROZBRAT will never be judged by law but always by political interests of the establishment.

It is a thorn in the flesh of the ruling class because they prove wrong all their dogmas and at the same time they create realities that undermine the existing dystopia.

If they’ll come for eviction, we’ll come to resist! No Europe without ROZBRAT!