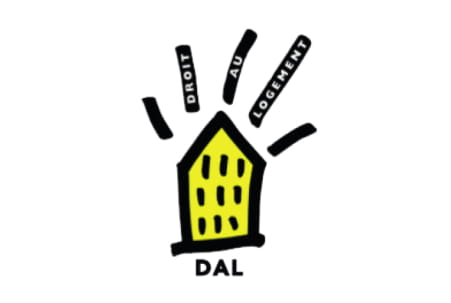 Droit Au Logement (DAL – Right to Housing) was created at the end of 1990 by poorly-housed or homeless families and militants of the 20th arrondissement in Paris following the eviction of two requisitioned buildings. The 48 families and militants organised the occupation and camp-in of a public square, Place de la Réunion, from May to Octobre 1990, winning the families’ rehousing. Since then hundreds of camps in public areas, requisitions of empty buildings, sit-ins at the offices of social housing corporations and institutions have been carried out. An incomplete list would include rue du Dragon, Quai de la Gare, the Cachan University Residence, and more recently camps on rue de la Banque, and Place de la République…). Struggles in the Paris region have won the rehousing of more than 10,000 members. In 1999, several dozen committees around France created the Droit au Logement Federation, based on a unifying charter. The ill-housed and tenants who are DAL members participate in decisions, negotiations and in the elaboration of strategies and actions. Collective action and struggle are indispensable to obtain housing, stop evictions, and enforce the respect of the right of all to stable, decent, energy-efficient and affordable housing. Our action is non-violent. The DAL is independent of all institutions, political or religious movements. DAL’s struggles are supported by public celebrities with moral or artistic status and organisations that respect the DAL’s independence. Since 1990, new rights have been won such as the DALO law (giving the homeless or badly housed a judicial tool to contest their lack of decent housing), the rehousing of slum inhabitants, the right to shelter until being rehoused for all homeless people, the penalisation of illegal evictions… but these rights are insufficiently enforced. Successive governments have supported the race for rent and real estate profits by speculators and investors, the skyrocketing of rents, the overexploitation of tenants and homebuyers, the selling off of social housing units and the creation of ghettoised working class neighbourhoods that suffocate the working classes and reinforce their social and economic precarity. The struggle against expensive housing, against the profits of a handful of privileged exploiters is very much on the agenda.