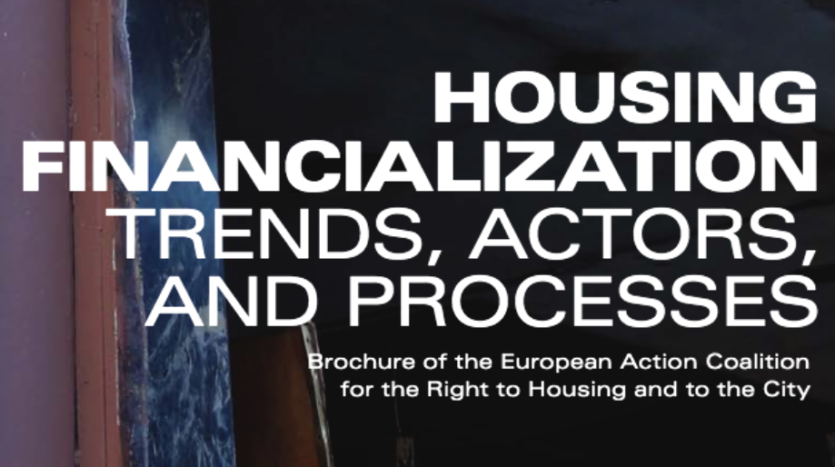 It has been over 10 years now since the collapse of the subprime mortgage market triggered the financial crash and yet it is as if nothing has changed, with the financial sector continuing to wield great influence over the housing market. Banks and investors are still profiting from the popular classes’ basic need for housing, thereby shaping our cities to line their own pockets.

The brochure Resisting Evictions across Europe we published in 2016 with the European Action Coalition for the Right to Housing and to the City (ACRHC) addressed the impact of the financial crash on the lives of millions of people in Europe and their resistance to these developments. Today, investment funds and banks are buying up entire neighbourhoods and pushing speculative investments in cities with the support of national and European institutions at a rate never seen before. This is exacerbating the level of conflict surrounding affordable housing and is increasing displacements and evictions.

This second brochure, following up on its predecessor addresses these dynamics and developments by examining the recent interrelations between capital and housing, bringing these together under a single cover term, namely the ‘financiali- zation of housing’. Its main goal is to provide clear answers to the many questions raised by this trend: an objective achieved in no small part thanks to the structure of the text taking its lead from a list of questions and its dense yet accessible style of writing.

This publication then goes on to outline policies aiming to meet the ACRHC’s demand for radical improvements to be made to the current disastrous state of affairs, before concluding with a series of inspiring examples of the resistance in many cities to the financialization of housing.

Once again, the collective input (in terms of both research and writing) of many affected people, whether members of activist groups or precarious academics who have been organizing struggles around housing from Lisbon to Prague and from Berlin to Athens, has been fundamental to bringing this brochure to fruition. Our thanks go out to each one of them, not only for their hard work putting this publication together but above all for the battles that they are fighting day in, day out regarding this issue.