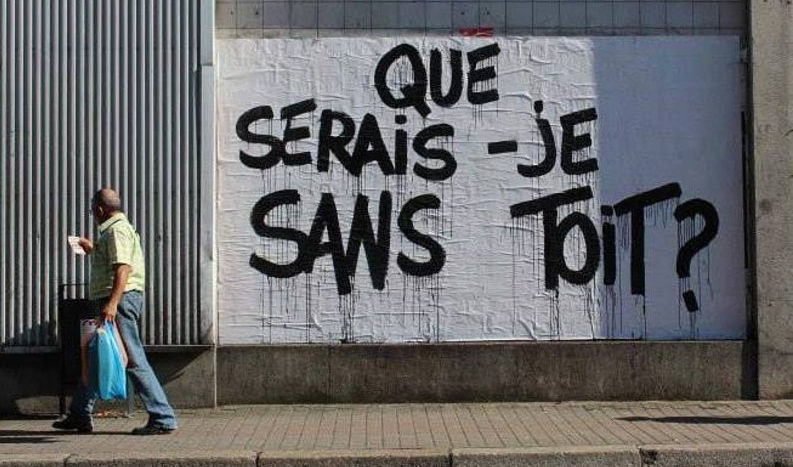 Following the adoption of an anti squat amendment by the Assembly Law Committee (Article 30ter of the ASAP Act), which disproportionately extends extra-judicial eviction to all untitled occupants, including subtenants or victims of slumlords, by introducing the vague notion of “occasional residences [1] which has no legal definition, a swarm of repressive amendments has been presented for debate in the session that is expected to take place next Wednesday or Thursday.

We counted more than fifty of them! Indeed, the right, the extreme right and even some LREM members are jostling to get rid of the squatters. It’s the priest, after 2 or 3 news items that the prefects have been slow to settle …

On the other hand, the amendments tabled by the left-wing groups call for the removal of the dangerous notion of “occasional residence”, and an amendment by the rapporteur moderates the version adopted in committee without ensuring that there is no slippage.

If the law extends eviction without trial to places other than “the domicile of others”, it risks applying retroactively and without delay to the new places concerned, including premises occupied for a long time, since these amendments are aimed at both occupation and maintenance.

Mobilization is necessary. From Monday morning an initiative is planned in Bordeaux following a first slip-up: homeless families, installed since 19 September in a disused EHPAD, were evicted without trial on 25 September by the police equipped with drones.

On Tuesday evening we will be in front of the Assembly, and we will be vigilant throughout the debates…

The anti squat frenzy :
Since the end of August, an anti-squat frenzy has taken hold of regional and national media, generally populist and right-wing, based on a few cases that had been made up, which could have been quickly resolved by the application of article 38 of the DALO law. The prefects dragged their feet …

This campaign, which gives rise to vague and even misleading statements, is actively supported by the UNPI representing private landlords and by the conservative think-thank IFRAP, which for years has been striving at every opportunity to submit amendments against squatters. This time it has been relayed as never before, perhaps with the help of a communication company.
In reality, occupation of main and second homes is rare. These media, which are on the lookout for these cases, relay less than a dozen a year! We would like them to react with as much determination to the death of a homeless person, or to the illegal eviction of a tenant by his landlord, who often throws the tenant’s belongings on the pavement!
The squat is an alternative to the legitimate street, while 3.1 million dwellings are vacant and the requisition law remains unenforced :

In 2018, there were 1858 eviction judgements for untitled occupants (so not only squatters), barely 1.5% of eviction judgements! In view of the 3.1 million vacant dwellings listed by INSEE in 2019, the 250,000 homeless people and the 2 million HLM applicants in our country, this is a drop in the ocean…

On the other hand, the occupation of vacant buildings and premises belonging to large public or private landlords makes up the bulk of squats in France. They house thousands of homeless people, mostly supported by collectives of associations in many cities in France, which somehow compensate for the violation of the unconditional right to accommodation for any homeless person in distress (e.g. in Lyon, Grenoble, Saint Etienne, Clermont Ferrand, Nantes, Bordeaux, Toulouse, Montpellier, Nîmes, Marseille, …).

Squats can also give rise to exemplary fights, such as in Notre Dame des Landes, Dijon (Tanneries and Lentillère), Paris (rue du Croissant, rue de la banque, etc.) or Grenoble, giving rise to alternative projects, or aimed at the creation of social housing after the inhabitants have been rehoused. In other cases, the occupations make it possible to animate a deficient neighbourhood life or to carry out essential struggles ….

Rather than reinforcing the repressive and extra-judicial approach against those who fight to stay off the streets, the requisition law must be applied, the tax on vacant housing must be reinforced, alternative projects must be supported, and real social housing must be built on a massive scale…

-decent housing and secure housing for all

DANGER: An amendment extends eviction without trial to all untitled occupants of vacant dwellings, premises and land .

The proposed amendment n°695 of the ASAP bill, inserted after article 30 bis, by the rapporteur Mr Guillaume KASBARIAN, LREM deputy and supported by the Government, extends administrative eviction (forced eviction by decision of the prefect and without trial), within a few days and retroactively to all untitled occupants of housing, offices, premises and vacant land.

Since it is neither a main residence nor a secondary residence, an « occasional residence » is therefore a vacant dwelling!

It could even be a ruin, in the garden of which a tent was put up a few years ago: nothing prevents us from explaining to the prefect that it is an occasional residence, since the law does not define it?

If this fuzzy notion is maintained, the amendment would also provide a means for slum landlords and other unscrupulous landlords to evict their tenants “under the table” who have paid their rent, a common practice in suburban detached houses, Haussmanian maids’ rooms or slums.

Without a lease, without a receipt, without a fluid bill (energy, water, etc.), the overexploited tenant would be at the mercy of an express eviction without a judge’s review, provided that the tenant does not pay his rent in cash or that he reports his situation to the health service or the tax authorities. An illegal eviction disguised as a legal eviction, as it were …

Furthermore, it is common for bona fide occupants to be defrauded by bogus landlords. These situations require a review rather than an expedited eviction ordered by an emergency amendment.

By extension, an « occasional residence » could also be a bare plot of land on which a mobile home has been “occasionally” installed, or it could be a business premises or vacant offices “occasionally” used to sleep there for a night or two…

Such a measure would therefore open the way not only to the expeditious eviction of untitled occupants who necessarily occupy a vacant dwelling, room, office or land, but also to swindling bona fide tenant families and undeclared tenants.

Finally, this amendment would apply retroactively to people who have been living in the home for several months – or years if the landlord has not taken due diligence.

This amendment comes at a time when the housing crisis is worsening and the housing conditions of the “first on the job” are deteriorating. Every year, the figures break sad records: vacant housing – 3.2 million -, eviction judgements, homeless people, unsatisfied HLM requests, DALO priorities not re-housed, etc.

Where the requisition law should be applied, and a national strategy to mobilise vacant housing should be put in place, it is chosen under the media pressure of a few high profile cases to put people in precarious housing on the streets.

Indeed, since 11 July, when the winter break in evictions ended, thousands of untitled occupants of vacant premises and land have been evicted by thousands and most of them abandoned on the streets, at best after a few nights’ accommodation.

From a moral point of view, this measure severely burdens the homeless who do not resign themselves to dying prematurely on the pavements.

Every year several hundred homeless women, men, elderly and disabled people die as a result of their miserable living conditions and the violation of their primary right to stable accommodation until they are rehoused.

If this brutal provision, which we discovered on Tuesday afternoon, is adopted by the law committee on Tuesday night in the assembly, we will have to mobilise, because the emergency is there:

There will only be one debate left in the assembly session from 27 September and a final adoption in the Joint Joint Committee to change the course of things once again.

Unavowed intention or error of appreciation by the Government? The words « occasional residence » must be deleted and a housing policy must be implemented to house the population.

A roof is a right!

[1] The term « occasional residence » was introduced by INSEE in the 1990s to designate dwellings occupied intermittently by their owner for professional reasons (e.g. MPs, pied à terre …). But an INSEE standard is not the law. The introduction of this standard in the census had the effect of temporarily reducing the number of vacant dwellings …

Another illegal eviction with police complicity
Protection of primary residence: Game over? We say no! Statement the Initiative against Auctions from Athens